Our lab is currently active in two main directions:

Equid Behavioral Ecology: Conservation of the Asiatic Wild Ass (Equus hemionus) – behavior, ecology, movement and social networks. We also continue to study social networks of horses in the wild (in the Netherlands and Spain) and domestic horses in Israel.

Our tools include field work, lab work and mathematical models to understand decision making in animals.

1. Population dynamics, habitat use and nesting behavior of Chamaeleo chamaeleon musae in sandy habitats in the NW Negev Desert (since 2009).

Among other elements we investigate the unique life-history that we found in C. c. musae. It stems from the fact that eggs are incubated for almost a year and that apparently individuals only breed in their first season and do not survive to the reproductive season on the second year. This combination leads to the formation of two parallel populations that cannot breed with each other.

Chameleons only rarely move on the ground, but during the nesting season (Oct.-Nov.) every trail of chameleon tracks that we find on the sand leads to a female, either before or after she deposited her eggs, and the nests can thus be located and studied. 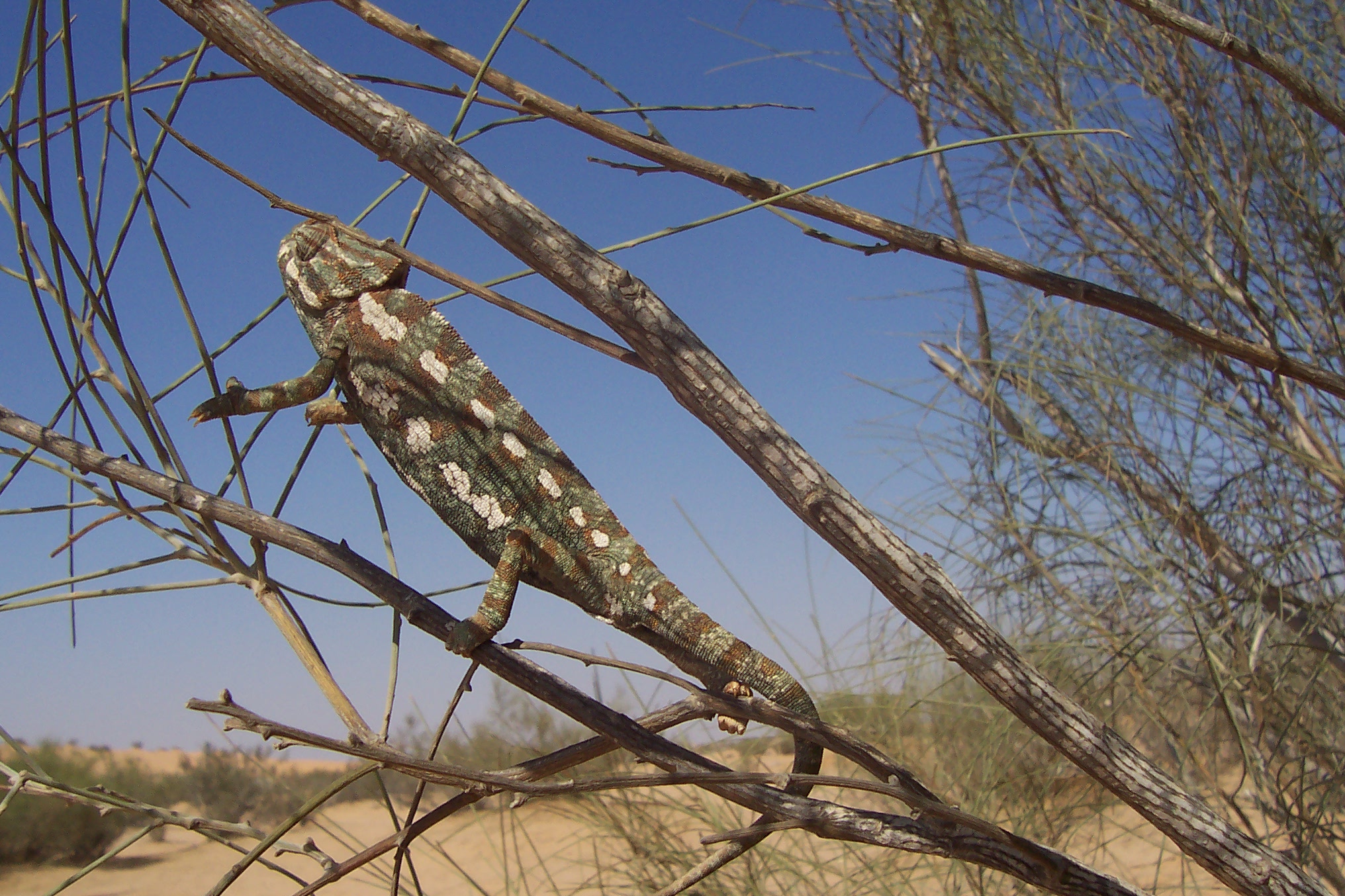 2. Evaluating the impact of Oil-Spill in the Avrona reserve on reptile populations. We monitor the distribution of reptiles in a variety of habitats in the southern Arava Valley. Some of the plots are within the area affected by the oil spill and these are compared to adjacent control plots. Among other activities, we videotape and analyze the foraging mode of a representative lizard, Acanthodactylus opheodurus. We are now establishing a second phase of the study that will follow three species of lizards in enclosures 24 hrs a day, and will evaluate their habitat selection. 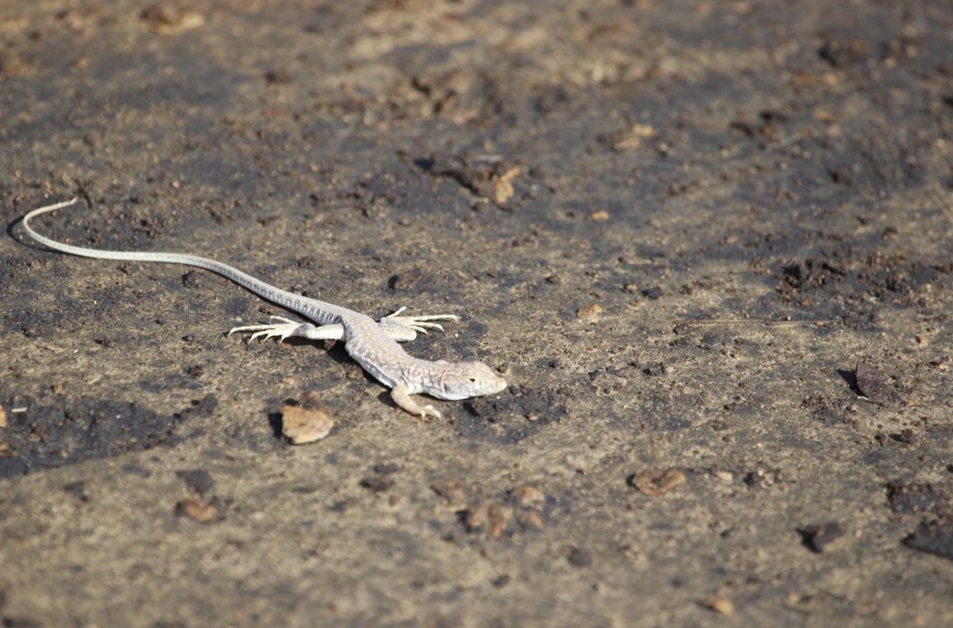 3. Sustainable management of coastal dunes for biodiversity conservation. Although partially protected, the southern coastal dunes of Israel have been modified by bush encroachment, leading to changes in their unique species composition. In collaboration with botanists and entomologists we characterize species composition in various types of dunes and in dunes from which we have partially removed the vegetation in a large scale experiment. We monitor rodents and reptiles and investigate impacts of habitat management both on distribution and on the behavior of species.

1. Group composition and behavior of reintroduced Equus hemionus in the Negev Desert. The Asiatic Wild Ass, Equus hemionus, was once abundant in western Asia. The species declined due to hunting and habitat loss. Between 1982-93 38 E. hemionus that originated from Iran and Turkmenistan were reintroduced to the Negev Desert, Israel. The current population in the Negev is estimated at more than 250 individuals, yet, their current social and genetic structures were not known. Since 2010 we record and videotape group composition and behavior of E. hemionus in the Negev. We analyze data from individual profiles (based on photos) record in which groups were they videotaped and construct a social network. Based on the group composition we evaluate the degree of fission-fusion and the reproductive success of females. The results of this study will be combined with ongoing genetic work (in collaboration with Shirli Bar-David) and will contribute to management decisions for this population. 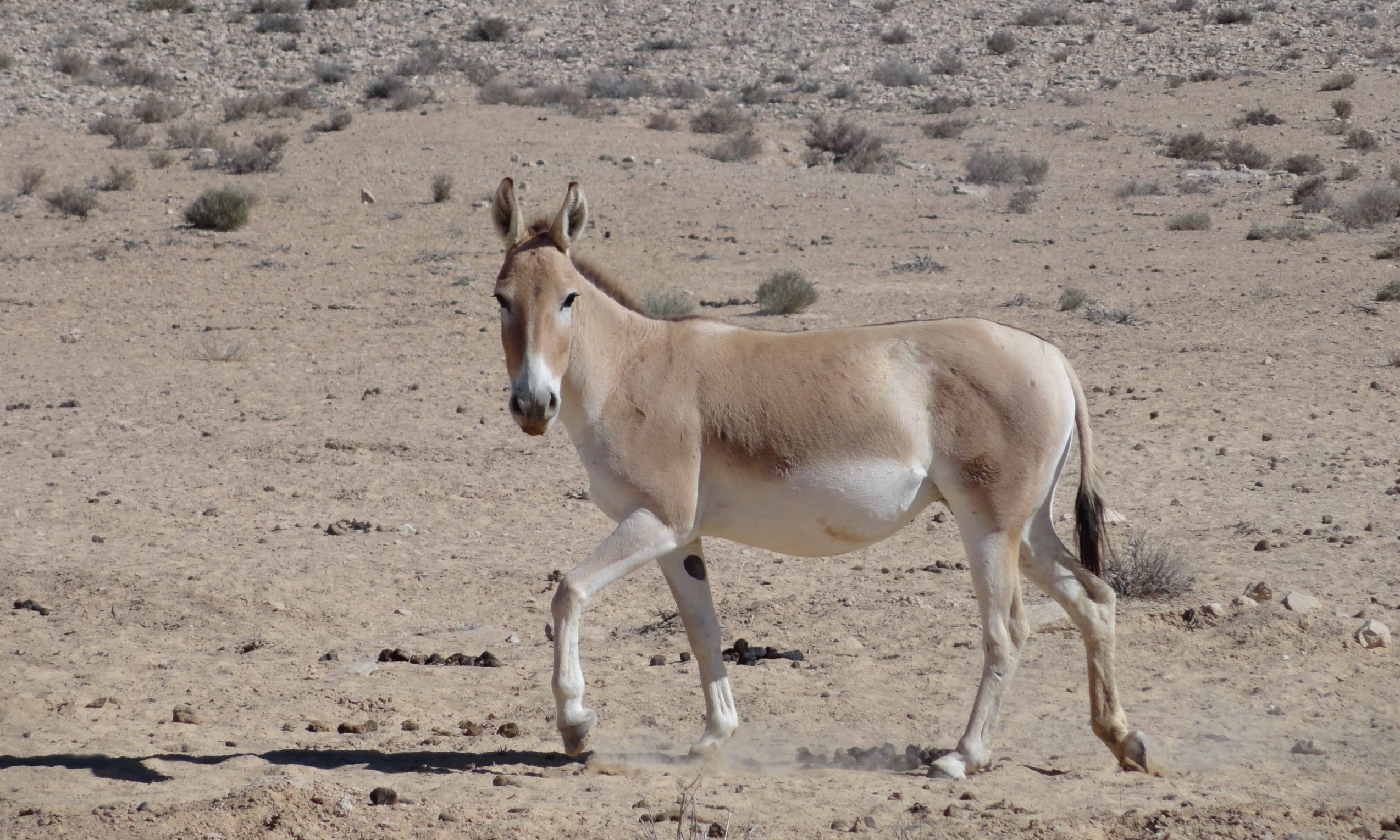 2. Social structure, leadership roles and movements in free-roaming horses. Social interactions in group-living animals are complex and involve diverse aspects of the groups and the individuals that form them. We observed behavior and movement mainly in two populations of horses in the wild:

2.1. Konik horses (Equus caballus) in a Dutch reserve in order to determine the initiators of movements and the individuals taking the lead in these moves. We then relate our findings to the social structure of the groups. The social network is analyzed based on positive affiliation and proximity, after aggressive interactions are removed. All 22 horses (not counting foals) are individually recognized and they are clustered in two harem groups and two bachelor male groups. Some network parameters predicted changes in group composition that eventually occurred after the initial study period. 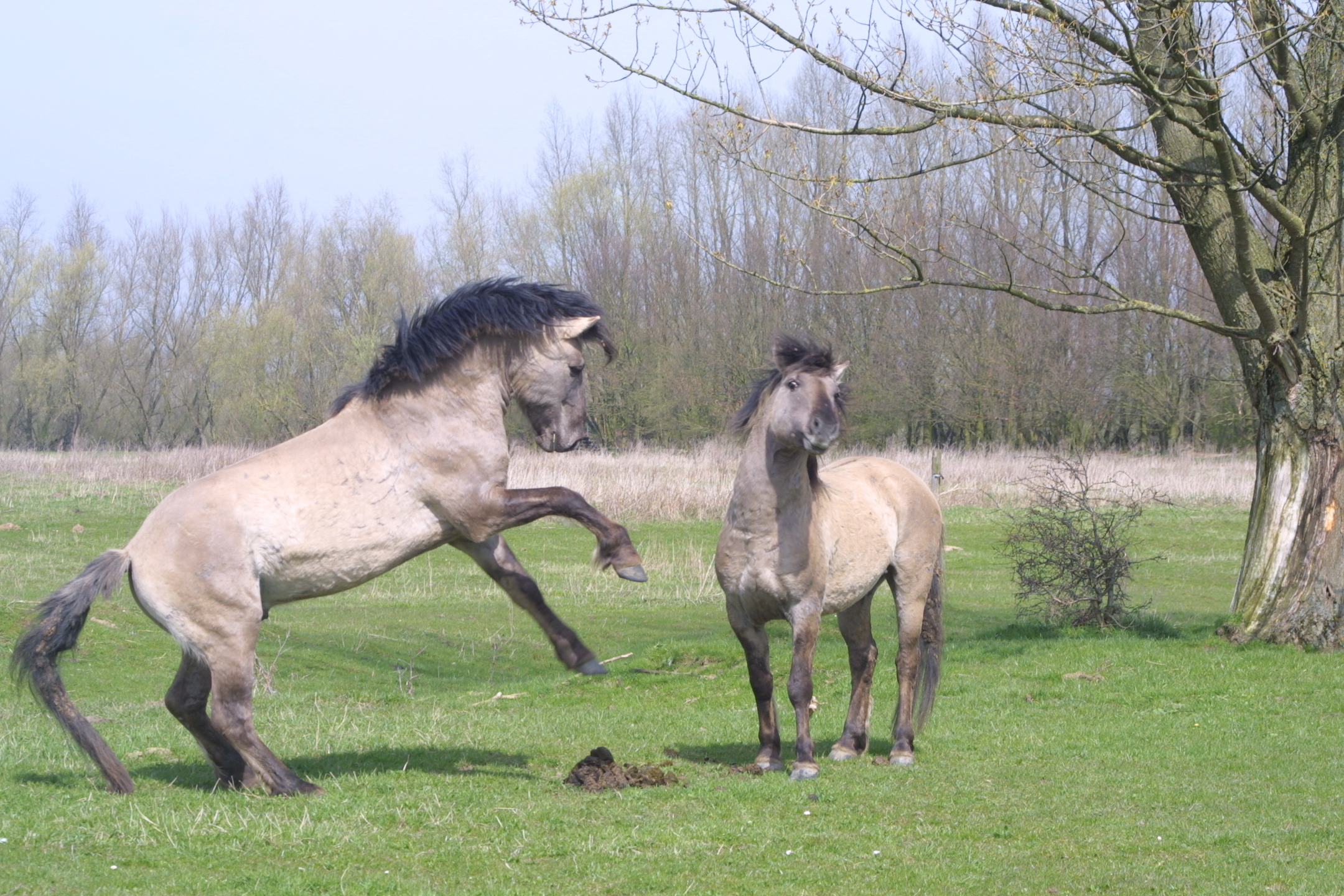 2.2 Dynamic social network and movement of Retuerta horses in the Doñana Biological Reserve, Andalucia, Spain. A population of about 120 horses was studied for a year. Horses were individually recognized, and group composition was monitored over the different seasons. The movements of 30 individuals were followed thanks to GPS collars, and we analyze the overlap in group home ranges at different seasons. In addition, we videotaped the activity and behavior of horses throughout the study period. 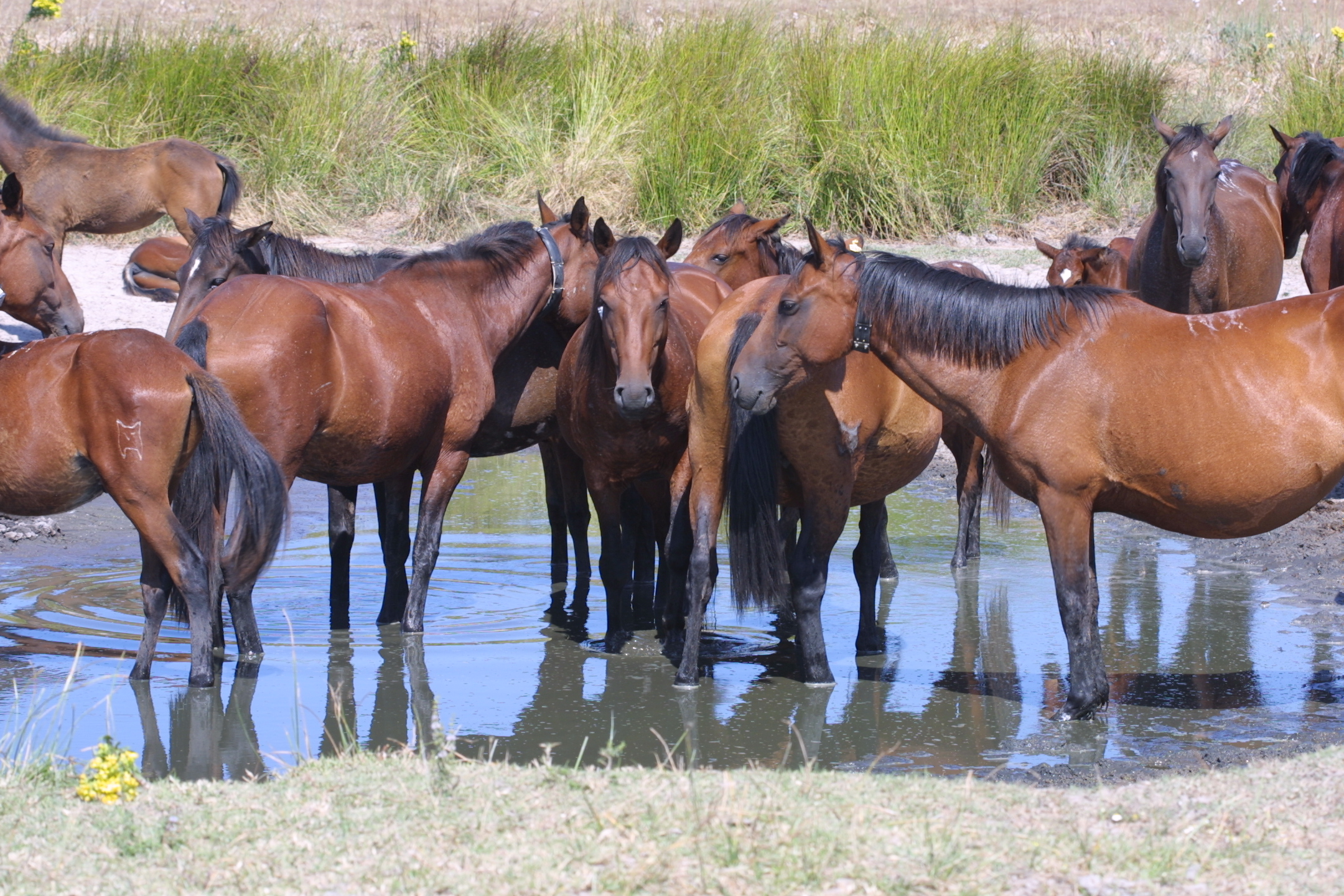 3. Social life of stabled domestic horses in several stables in Israel. We collect information regarding the social network, the agonistic behaviors among individuals and aspects in the personality of individuals, and in particular, the reaction to novel objects (neophobia). In addition, we investigate various designs in paddocks and how they affect the amount of movement of the horses. 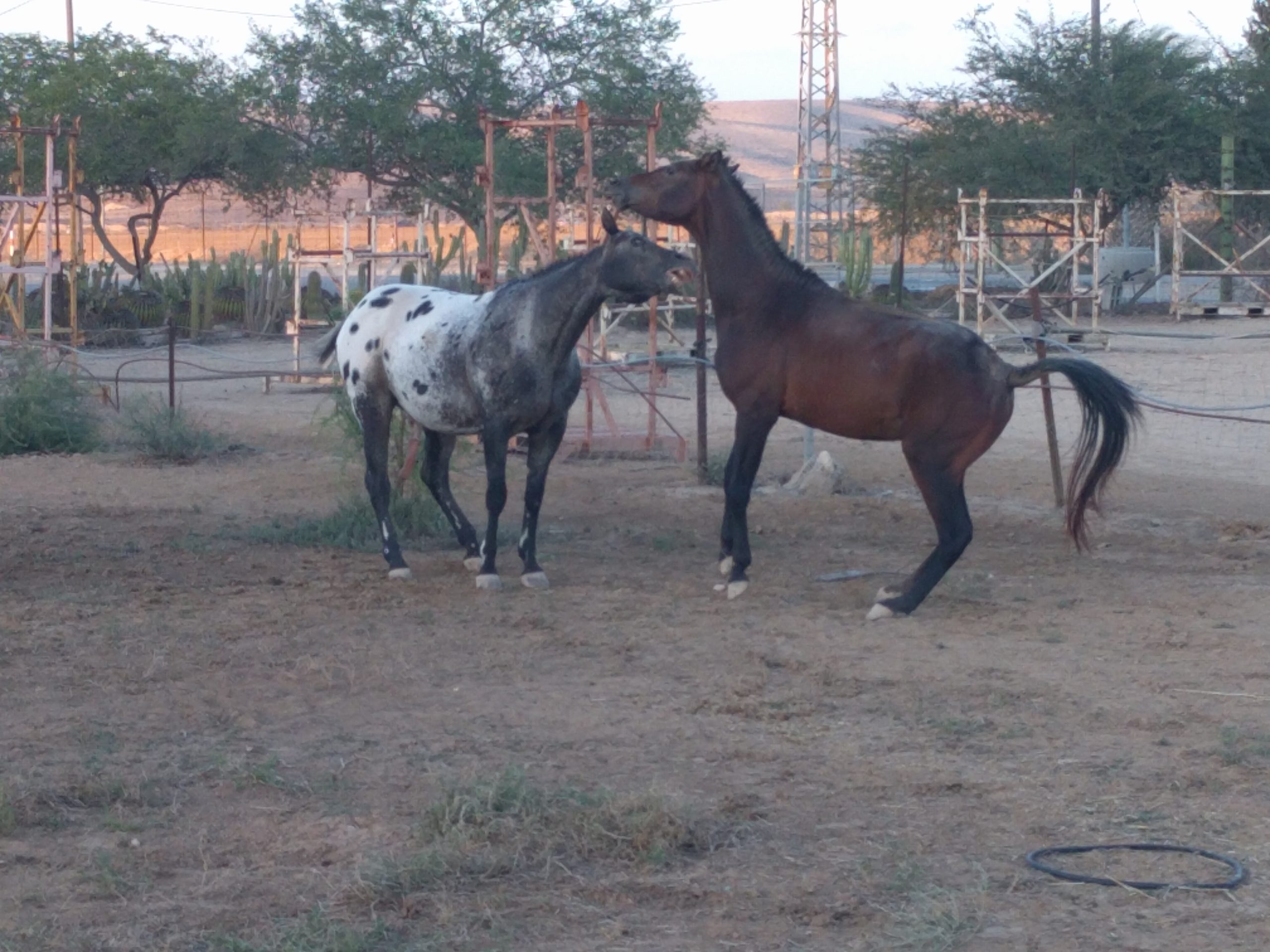 Ben-Gurion Univ. of the Negev,